A Wreaths Across America tale

Arlington gravesites in the fall, with my old friend the Washington Monument in the background. Image courtesy of aconant, Morguefile.

It’s 5:30 a.m. on a Saturday morning, and I’m on my way to Arlington National Cemetery with friends. We have chosen to participate in Wreaths Across America, an annual event that’s been going on since 1992.

It is still pitch dark when we get through the entrance and park. We make our way to the amphitheater, and it’s hard to make out the ghostly figures of others dimly lit by flashlights or the gravestones that surround us. I shiver a little in the morning air; temperatures are predicted to go up later in the day but it’s still chilly for now.

We collect outside the amphitheater and I look around to see who else is there. There are people dressed in fatigues; I see quite a few in Navy and Army clothing. Others are civilians — children, teenagers, young adults, middle-agers and the elderly. Some have come to place wreaths on the graves of their family members. Others, like me, are members of groups that chose to show up on this Saturday morning as an act of kindness and support to our nation’s military.

Early morning outside the amphitheater at Arlington National Cemetery. Photo: Blogger’s own.

Later on, the sun comes up and it’s easier to make out the faces of my fellow volunteers. Our zone captain has a few announcements for us: Be careful to follow the cemetery’s security rules, exercise caution to stay safe so you don’t get hurt, and listen to your truck captains. 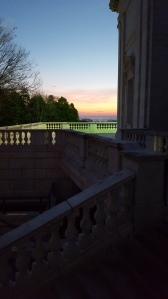 Briefing from our zone captain. Photo: Blogger’s own.

As the morning advances, we walk toward the area where our truck is waiting. The fog over the graveyard gradually dissipates as the sun moves higher in the sky. 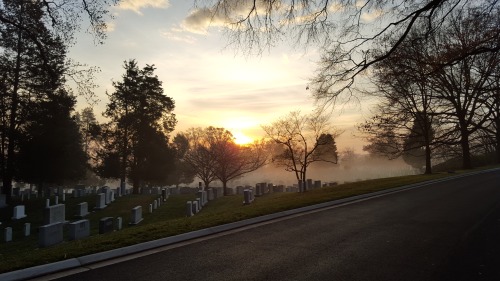 We have our assigned sections, and I’m near 7A. It contains some well-known people, including Lee Marvin the actor, Joe Louis the boxer, and Jimmy Doolittle, the WWII pilot who led the raid on Japan a few months after Pearl Harbor. It’s an interesting coincidence since I’m reading a book about Jimmy Doolittle right now (blog post to come on that one soon).

Our team captain says that the driver has had a long trip. This truck driver went from North Carolina to Maine to pick up the wreaths and came back to Virginia so that we could get the wreaths we’re handing out.

There are a massive number of graves to be covered at Arlington and we have thousands of wreaths to hand out to our fellow volunteers. Over 901,000 graves will receive a wreath today; this event doesn’t just happen at Arlington — it also occurs at different cemeteries across the country, too.

After a while, the boxes are unloaded, ripped open and unpacked. I start handing wreaths out to various people; the greenery used to construct the wreaths is pleasantly fresh and smells wonderful. As the boxes empty, I switch to a team that is flattening the boxes and stacking them in piles for pickup.

From time to time, I take a break and snatch a chance for a photograph or two. 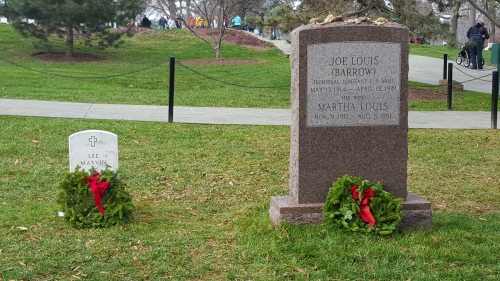 Gravestones of Lee Marvin and Joe Louis. I wonder if they ever met in life? Photo: Blogger’s own. 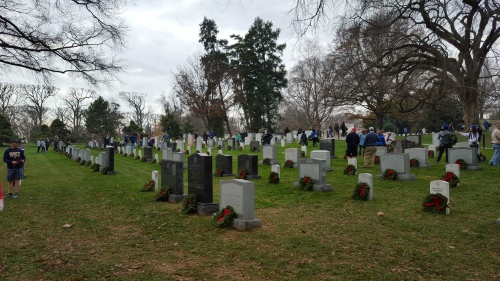 Wreaths being distributed in 7A. Photo: Blogger’s own. 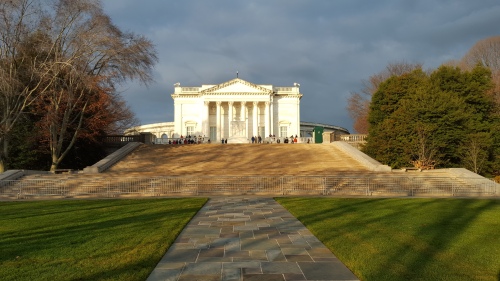 The other side of the amphitheater. Photo: Blogger’s own.

The ceremony at the Tomb of the Unknown Soldier. It takes place 365 days a year, in any kind of weather. Photo: Blogger’s own.

I talk with other volunteers from time to time. One courtly older man with a soft Southern accent, D., is especially interesting; he is involved with the company that supplied our truck and his uncle was General Patton’s photographer.

Both D. and his wife thank me for what I’m doing today. I’m so touched that they said that. I just figured that it was a nice thing to do for the men and women laid to rest there.

I see gravestones being respectfully saluted. Another gravestone has a man down on one knee, covering his eyes with one hand as he weeps.

There are many children here, including Boy Scouts and Girl Scouts. Most have rapt faces, absorbed in the story that the adults tell them about the friend or family member lying in that grave.

It’s all over by 11:30 or so. It’s a magnificent sight, seeing those long lines of gravestones cheered up a little by the green wreaths and vivid red ribbons. I hope the wreaths offer a bit of consolation to those who know the people buried in Arlington.

It’s time to go. As I walk out, I muse about all of the people buried there. Some had good, long lives; others had their lives cut short all too soon. What did they see during their lifetimes? What did they feel? What were their families and friends like?

I won’t know, except for one person. A family friend of ours, H., is buried next to her husband in this vast place, but she’s in a different section and there was no time to visit her today.

I like to think all these wreaths would have made her smile.